The Stormossen company is owned by six municipalities in Ostrobothnia to manage the waste from the owner municipalities. The company’s turnover was 13.4 million euros in 2021. The centre of the business consists of the waste treatment plant in Koivulahti (Kvevlax) in the municipality of Mustasaari (Korsholm). Stormossen currently employs about 42 people.

Stormossen’s business is an example of a real circular economy. We deal with biowaste and sludge and convert it into compost soil and biogas vehicle fuel. The result is a climate-smart cycle of nutrients and energy.

Stormossen’s first refuelling Station for vehicle biogas was opened in February 2017. In the same area, a bus depot was built for the slow-fill refuelling of the Vaasa city’s twelve gas-powered buses. A second public refuelling station opened in spring 2020 at the southern exit from Vaasa.

Sales of compost soil have been ongoing since 2009 and have included garden soil and lawn soil. The company began to handle the sale of compost soil under its own initiative in 2016. The compost soil is made from digestate produced from the digestion of biowaste and sludge.

The recycling rate for municipal waste is over 99%. Our goal is that 65% of the municipal waste produced is recycled as material at the latest in 2030. Stormossen maintains a comprehensive and easily accessible infrastructure to receive waste. The network consists of ecopoints, key containers for combustible waste, campaign collections, manned and unmanned recycling stations, mobile recycling stations as well as the recycling mall Minimossen. The services also include a pick-up service and an active information policy promoting the services we provide.

Stormossen handles the tasks transferred to them by the owner municipalities in a sustainable, modern, technically-efficient and cost-effective manner.

Vaasa and Korsholm were the joint founders of Stormossen. The official start of the company, took place in 1985. Stormossen is owned by six municipalities – Vaasa, Korsholm, Isokyrö, Korsnäs, Malax and Vörå. In these six municipalities live approx. 100,000 inhabitants.

Map of municipalities and population 2021 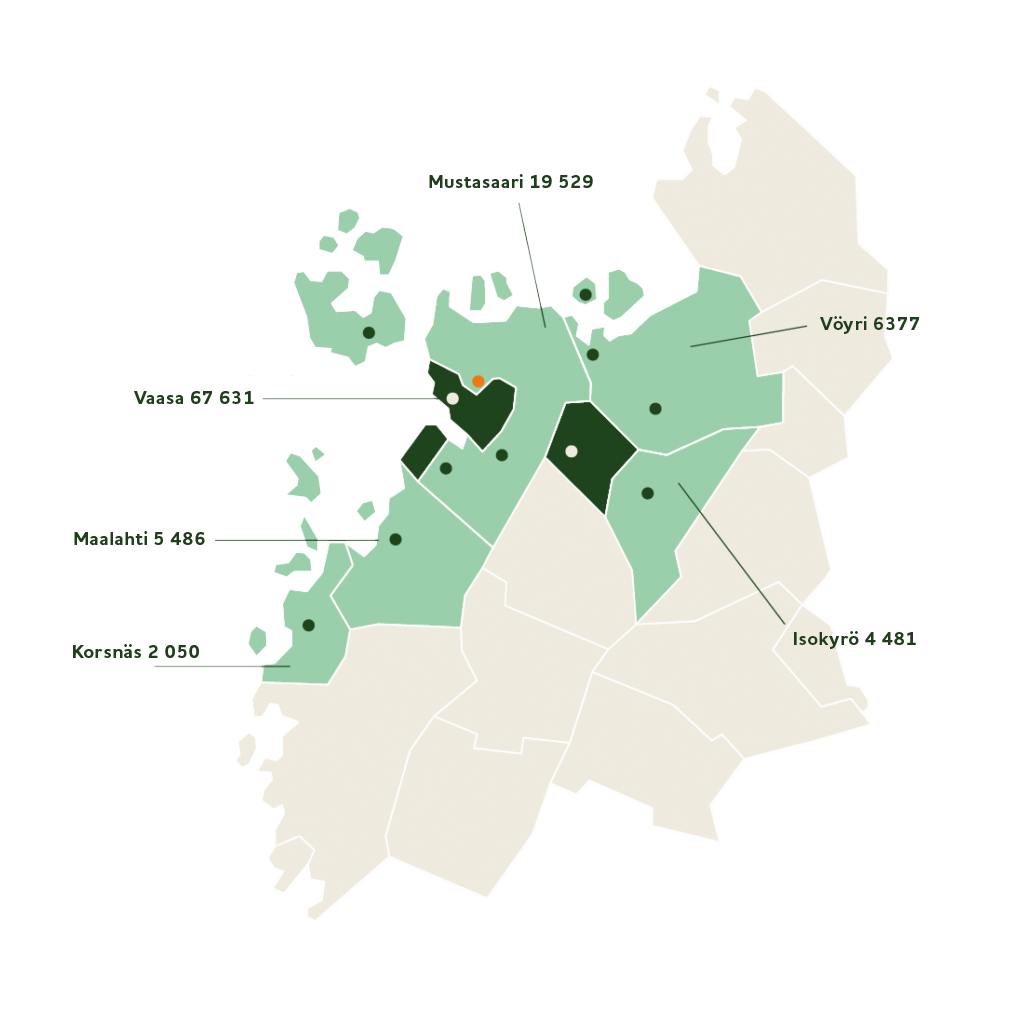